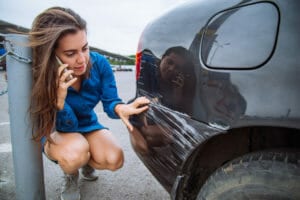 Recent statistical reports from the Automobile Association of America (AAA) show that there’s an average of one hit-and-run crash in the U.S. every minute of every day. This accounts for an average of 682,000 accidents per year, resulting in more than 2,000 deaths per year. It’s also reported that hit-and-run deaths have increased an average of 7.2% per year since 2009.

This is troubling news in itself, but consider also that if you’re a victim of a hit-and-run accident and the culprit is not caught, you’re left holding the bag for the costs of any injuries or property damage you suffer. The uninsured and underinsured motorist coverage portion of your Greensboro auto insurance policy is what reimburses you for an accident involving an uninsured or underinsured driver or for an accident with a hit-and-run driver.

North Carolina is one of 20 states in the U.S. that has a mandatory requirement for drivers to carry uninsured/underinsured motorist coverage along with required liability protection. Like the liability coverage, however, minimum coverage dollar amounts are woefully inadequate to cover many claims.

It’s easy to see that these minimum amounts could be quickly reached for an accident of any seriousness, in which case excess amounts come right out of your pocket. Many experts recommend carrying five or ten times the required minimum coverage.

In N.C., the minimum amount of coverage required for uninsured/underinsured motorists is the same as for single person bodily injury. In this case, $30,000 per accident. This is, again, a very low requirement and you should consider carrying more than the minimum amount.

Being involved in an accident caused by an uninsured driver isn’t that much different than being the victim of a hit-and-run. The main difference is that the identity of the uninsured driver is known, which means you have someone against whom you can bring a legal liability suit. Unfortunately, an uninsured driver likely has limited resources from which you can collect a judgement.

According to the Insurance Information Institute (III), an average of 13% of drivers on the road are driving uninsured. For North Carolina specifically, the percentage of uninsured drivers is 9.1%. Best advice: review your Greensboro auto insurance coverage.