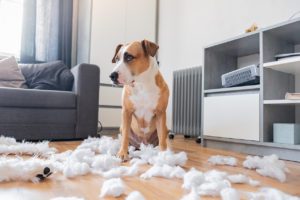 Not All Pets Are Included

Forbes Advisor analyzed banned dog lists from 42 different homeowners insurance companies nationwide to learn the most frequently banned breeds according to filings made by insurers to state insurance departments. The above list contains breeds banned by at least 30% of insurers analyzed, although there were 21 other breeds banned by between 5% and 29% of analyzed insurers.

Other dogs commonly banned by homeowners insurance policy coverage include:

Not all insurers have a list of specifically banned dog breeds but may handle each dog owner’s policy on a case by case basis.

Insurance companies have become increasingly alarmed by the number of claims related to dog attacks by certain breeds. According to the American Property Casualty Insurance Assn. (APCIA), children comprise one-half of the annual dog bite victims. According to the Insurance Information Institute (III), in 2017, which holds the recent high for annual dog bites nationwide, there were 18,522 claims filed. 2020 saw a decrease of dog bite claims down to 16,991, but the average cost of these claims was $50,245. APCIA reports that the cost of reconstructive surgeries and legal costs for litigation rose 15% in one year.