How Can I Insure Myself If I Drive for Uber? 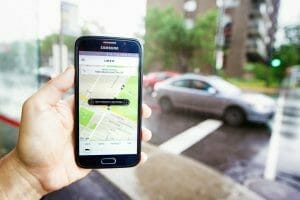 When Uber was founded in 2009 as a ride-sharing “Transportation Network Company (TNC),” it was the first of its type and in uncharted waters. Uber has often been plagued by questions about its legality and has come under fire from governments, communities and various organizations. The service has been banned in several jurisdictions yet seems to be thriving nonetheless.

Confusion as to the legal status of TNCs has spilled over into the insurance sector, and questions have arisen concerning the legal responsibilities of these companies and their drivers regarding liability in vehicle accidents and appropriate insurance coverage for the drivers and vehicles involved in the ride-sharing business.

Until 2014 there were few regulations or liability insurance requirements affecting Uber. That changed when a young child was struck and killed by an Uber driver in San Francisco. Because the driver was neither carrying a fare nor on his way to picking up a passenger, the company refused the assignment of any liability or legal responsibility. When family members sued the company, California lawmakers started probing the need for increased insurance requirements for TNCs. Soon after, Uber and other ride-sharing companies expanded their insurance coverage of drivers to include protection for those who were in between fares.

Uber insurance for drivers has been changing rapidly, although there are still gaps in the coverage provided by the company. There are currently two levels of company coverage:

The above-outlined company insurance protection typically doesn’t kick in until the driver’s personal vehicle insurance fails to cover the losses suffered. The problem here is that many drivers’ personal insurers won’t cover the losses and may even cancel the personal policy because the driver was engaged in a “ride-for-hire” commercial business. Two options exist. A driver can purchase commercial vehicle insurance, but this can be cost prohibitive. Fortunately, more and more insurers, such as Progressive and MetLife, now offer vehicle insurance for ride-share drivers. With Uber rapidly moving into NC, including right here in the Piedmont-Triad area, this is something you may be considering.