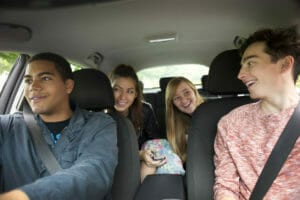 A study completed for a large American insurance company several years ago found that, with nearly 1,500 parents of teen drivers responding, when adding a teenager to the parent’s auto insurance policy, cost of the coverage increased by an average of about $800 per year. A more recent study found an average increase when adding a teen to his or her parents’ existing car coverage of about $620, which is still a significant amount. It’s a small price to pay, however, when compared to the cost of that same teenager obtaining their own car insurance coverage which, according to current rate quotes, may run in excess of $2,200 annually.

There’s No Question – Teen Drivers Cost a Lot to Insure

However you look at it, insuring a teen driver is an expensive proposition. The main reason for this is because new drivers, on average, have the worst driving records, have higher accident rates, file more claims and more expensive claims. Premium rates for teen drivers are directly related to the amount of risk an insurance company takes on when insuring them. This, however, leaves room for some teen drivers to obtain lower rates by taking advantage of various discounts offered by certain insurance companies. Check out the following ways you may be able to save dollars on your teen’s insurance coverage.

Several large insurers such as Progressive have a device that works in conjunction with your car’s computer to relay information regarding your driving habits. It can relay how fast you’re driving, how hard you brake and what times of day you’re on the road. Safe drivers are rewarded with lower insurance costs.

You Have To Ask

Some insurance company discounts are automatic, while many you won’t know about less you ask. Raising your deductible or buying a car with anti-theft technology will likely get you an automatic discount, but how about a student getting good grades?

Many auto insurance companies extend a discount to students maintaining a certain GPA, usually a B average or better. But you’ll have to ask about this one. Some companies give discounts for drivers who successfully complete a safe driver program – even an online course. Some also discount teens who sign a safe driver contract with their parents. Additionally, notify your insurance company when your teen college student is away at school (without a car). Your rates may decrease at these times.